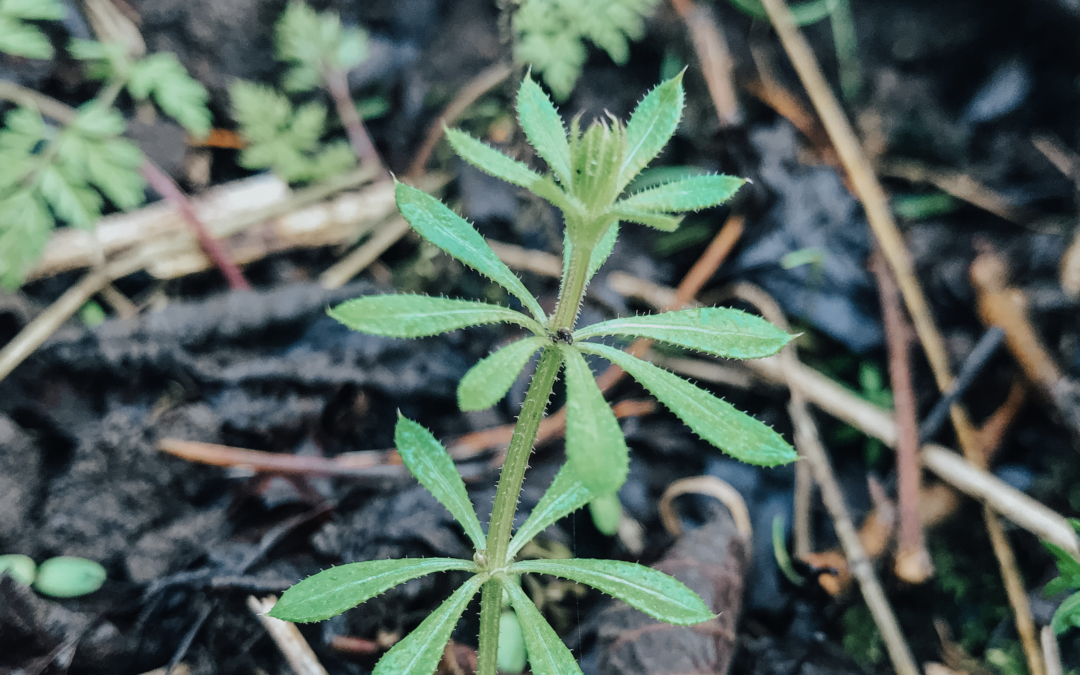 Galium aparine or Cleavers is one of the first spring plants to brave the early spring weather. Tiny whorls of cleavers burst through the matted brown carpet of dead grass and leaves and remind us that the ground beneath our feet is bursting with growth and shoots just about to emerge. Growing up cleavers was a plant that felt light and humorous to me, it would cling to our dog’s coat, peppering her hair with tiny round seeds that were a nightmare to remove. My parents would grumble at the annoying thicket of cleavers that would grow with enthusiastic vigor over borders and hedges if given half a chance. The saying Give an inch take a mile springs to mind when I think of this plant. However as a gardener I have never found cleavers frustrating, it pulls up easily and seems to be a harmless and playful weed, if weeds were to have characters.

Cleavers has many names, goosegrass, stickyweeds, sticky willy, robin run the hedge…but its latin name gallium aparine nods towards its sticky tendencies with the greek aparo meaning to seize. There are suggestions that gallium means curdled milk and that cleavers can do just that but I have yet to try that particular experiment. Interestingly cleavers belongs to the coffee family which is probably why many foragers like to make cleaver coffee from the ripe seeds! The root of cleavers also produces a decent red botanical dye that can used to tint clothing and yarn pretty shades of pink not too dissimilar than the avocado stone.

How I use Cleavers at Home

Cleavers is a timely herb. Arriving in early spring its comes as a wake up call for our body systems thanks to its cleansing effects. Due to this it is one of the first herbs of the year that encourages me to fill my basket and take it back to the kitchen. I use cleavers mainly as a infusion or as a infused oil although in a tincture it has powerful effects that shouldn’t be overlooked. Small, young shoots can be cooked although avoid the stems and older leaves. Later in the season Cleaver’s small seeds can be dried and toasted and used as a drink.

Cleavers is an interesting plant to use for the body and ones thats so appropriate for early spring when our bodies can full sluggish and dull from a long winter.  Cleavers is a lymphatic herb which, in a nutshell, is a herb that helps to encourage healthy movement of lymph.

“Your lymphatic system, part of your immune system, has many functions. They include protecting your body from illness-causing invaders, maintaining body fluid levels, absorbing digestive tract fats and removing cellular waste.”

As a lymphatic cleavers can stimulate the lymph system which in turn promotes healthy a immune system and this lymphatic action is said to help with chronic skin issues such as psoriasis and eczema. It is said to be useful for reducing swollen lymph nodes and tonsillitis and with it’s diuretic action it is meant to be a good herb to use to help ease UTIs, reduce water retention and can also help with the  elimination of waste and toxins from the body.

Remedies and Recipes with Cleavers

Cleavers can be used for remedies and as a wild edible. It is full of healthy nutrients and contains vitamin C and has traditionally been used as a pot herb for centuries.

The best time to use cleavers in the kitchen is in spring when the cleavers leaves are fresh and young and so much more tender. The older leaves will be coarse and rough and fibrous and best left on the plant. Once the plant has gone to seed its definitely passed its best for eating. You can harvest the young leaves and shoots and once the stem has been removed these can be wilted or sautéed or cooked in stews or soups for a flavour similar to pea shoots.

How to make a Cold Cleavers Infusion

My favourite way of consuming cleavers is through a cold infusion. To make a cold infusion gather a handful of young cleavers. No roots! Give it a quick wash and then chop roughly. Place into a glass jar or jug and fill with with water. Seal with a lid and leave in a sunny spot for at least an hour. Then strain out the cleavers and serve with a squeeze of lemon and some ice. Try drinking this daily throughout spring. To support the lymph system.

As a remedy I also like cleaves Infused into vinegar alongside other spring herbs like dandelion and chickweed, in a  tea blend, juiced, in a tincture and in an infused oil for the skin.

Once cleavers has grown into a larger plant it is an easy one to identify. It has four sided, square and hollow narrow green stems which are coated in hairs. Its leaves are narrow coming to a point at the ends and grow in whorls up the stem. Young cleavers have fattier shaped leaves with a less tapered shape but still maintains its point at the tip. Cleavers flowers are very small, white or green and star shaped and grow in clusters. The fruit and seeds are small round balls or burrs that cluster together in groups and again are coated in hairs, just ready to stick to your coat, child or pet!

The way that cleavers grows is with its little hook like hairs that are used to climb up other plants, reaching for light. Without the hooks cleavers would simply slump to the ground as its stems are pretty soft. The hairs on the seeds help with dispersal too.

This website uses cookies to ensure that we give you the best experience on this website. If you continue to use this site I will assume that you are happy with it.OkRead more