Ode to September-Customs and Traditions of September 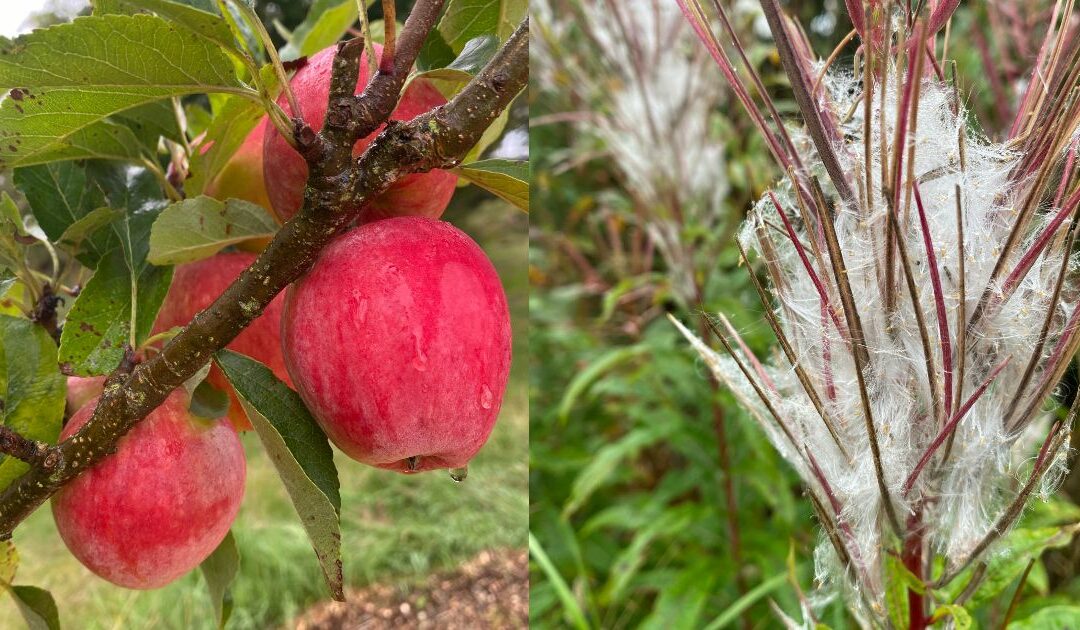 September is a beautiful month-the bridge between summer and autumn.  There’s a sense of release as the children go back to school and a hush falls during the day. The high energy of summer is waning and nature begins to set seed and retreat back to its roots.

There are days which are so golden and full of sunlight and warmth that summer still feels veryvpresent, and then other days where the air feels cooler and the leaves crunch underfoot when I realise that autumn has arrived, almost without me noticing.

I try to make the most of these precious honeyed days-feeling the gratitude of the season just passed and the abundance it has created in my garden and in nature. The hedgerows drip with ripe blackberries, elderberries, rowan berries and rosehips. Our orchard feels heavy with fruit as we gather windfalls each morning, getting a sneaky snack while we are it-each bite of apple tastes so alive and vibrant-the taste of rainstorms, snow and blossom in every mouthful, nothing like a store bought variety. The fields are yellow, having been cut for hay and crops, and all that is left is the sharp stubble of stalks that snap satisfyingly under foot. The grass in the meadows has reached its full height, like a jungle for my toddler, and now it has set seed too. Each grass variety is so beautiful-some shimmer with delicate lilac fronds while others have razor sharp leaves and tightly packed seed heads. Its so easy to overlook the more humble plants like these grass stems but by slowing down and observing the smaller details it always amazes me how much intricate beauty can be found right on our doorsteps.

There’s also a bittersweetness to September. In a matter of weeks the autumn equinox will arrive and with it the balance of equal day and night. After this date the night begins to stretch out longer and longer until the winter solstice in December. The autumn equinox marks the start of the cold season and once it begins summer has truly ended and night prevails. Here in Northern Ireland the sunrise at the end of the month will be at 7.26am and sunset at 7.04pm. Which is roughly an hour later in the morning and an hour earlier in the evening which can certainly feel very noticeable especially when contrasted with midsummer when the sunrise was at 4.55am and the sunset at 10.04pm! Incredible!

September is named, rather unromantically, for the Roman number seven, so meaning the seventh month in the Roman calendar. However, if we look to Celtic, local and folk names for September there are some more evocative ones such as the Scots Gaelic name for September which meant fat and pleasant, or the Irish Mean Fomhair which means mid harvest. Other similar names refer to the straw ripening and the abundant harvests. These all are a reminder how much our lives would of revolved around the agricultural calendar.  And September was one of those pivotal times of year when crops where bought in and food was preserved for the coming winter.

The full moon of September then is aptly named the Harvest Moon or sometimes the Corn Moon. The moon is said to be named this as farmers would of used this light from the full moon to finish bringing in their crops. Earlier on in the night this full harvest moon might have a distinct red hue to it, this is due to a process known as Rayleigh scattering.

Some of the celebrations that fall during September include the Autumn Equinox, Mabon, Rosh Hashanah and Michaelmas. For me I like to honour the equinox by journaling, letting go on anything that feels like a burden and decorating the home for the colder season ahead. Some of the things I like to do is stringing up fallen leaves and hanging them in garlands around the house, drying apple slices, filling up vases with seed heads or hydrangeas and everlastings to dry. Making a harvest wreath for the door and bringing out the beeswax candles and using them for each meal again.

With the start of autumn falling mid month and winter not too long away, I find September the best month for cleaning out clutter, both physically and mentally.

While the days are still warm and light I fling open my windows and give my cottage a thorough clean, removing the dust and cobwebs and letting the early autumn breeze freshen the whole house. Blankets, sofa and cushion covers are washed and dried on the line in the autumn sun, and back inside once the house is clean I like to burn warming essential oils like orange and cinnamon or marjoram and cedarwood and light the log stove for the first time since winter. The smell of log smoke, the sound of crackling wood and the colour of fire light make me feel emboldened and ready to welcome in the cold.