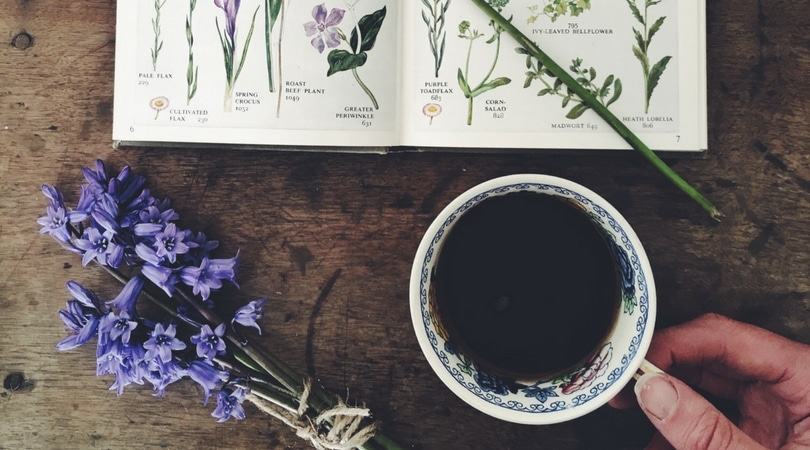 In this months seasonal guide, we’ll be looking at April and what we can expect to see in nature, on our plate and some little facts on the month.

Whenever I think of April I cant help but think of the Little April Showers song from Bambi- it pretty much sums up the erratic weather. One minute a rain storm the next gorgeous sunshine. This is a definitely a month for raincoats and umbrellas but also to get outside into nature and see all the beautiful flowers blooming and hear the cacophony of birdsong from the returning flocks.

Ps; I’m sure you’ve already noticed the significant increase in day length since the beginning of March and during April we can expect roughly another 2 hours! Yippee!

What does April mean?

The name April possibly derives from the verb (APP-ER-IRE) aperire otherwise known as to open. This suggests the opening blooms and buds that really herald the month of April. Here on the farm, after a very slow March, the daffofills are now peeling open to reveal their cheery yellow flowers and further South gorgeous cherry blossom is in full bloom.

It is also suggested that the name April could come from the goddess Aphrodite and that April was named in her honour.

Aphrodite is the Greek goddess of love, pleasure and beauty. Symbols associated with her include roses, doves, swans, sparrows and myrtles. I think its quite fitting that April could be an ode to her as it is a month of growth and the emergence of beauty after a long cold winter.

In Anglo-Saxon times April was called eosturmonath after the goddess Eostre. This pagan goddess was linked with fertility and birth-possibly where some of the symbolism with eggs and Easter originates.

Of course in the Southern Hemisphere April is autumn, the equivalent of October here in the UK and Ireland. It’s a strange thing to get my head around anyway!

What festivals and celebrations are happening in April?

The most popular festival during April is of course Easter the Christian celebration of the resurrection of Christ. There’s also April Fools day on the 1st where some play pranks of friends and family. There are many ideas on the origins of this festival of foolishness including a link with Chaucers Canterbury Tales. Other celebrations include the last day of Passover, Isra and Mi’raj and St.Georges Day.

What’s in Season in April?

April, while not the most abundant month of the foodie calendar has its perks. Normally Jersey Royals, those waxy first potatoes are soon available pretty much everywhere and are a taste sensation. However this year everything seems a bit behind-which is partly why this episode is coming to you a week into the month. I suggest looking back on March’s seasonal offerings for a few more weeks instead of buying imported veg.

Outdoor rhubarb, which comes into season this month is another April perk. I adore rhubarb and find the best way to cook is in the oven to preserve it’s shape and texture. To do this cut the rhubarb into inch long chunks, pop into a baking pan with 75g of vanilla sugar and the juice of one orange and roast for about 30 minutes at 180C. This is delicious with homemade custard or on top of yoghurt. Other uses for rhubarb is as icecream, crumble, syrup, jam, cordial and chutney.

Sorrel is another of April’s culinary gems. This lemony herb should be prolific during April and is the perfect companion to potatoes or in a hedgerow pesto.

Other seasonal veg and fruit include Cauliflower, Sea kale, purslane, lettuce, watercress and radishes. These should become readily available at farmers markets this month as will rhubarb and wood pigeon, wild garlic, cow parsley, chives and st Georges mushrooms.

What’s Happening in Nature in April?

Birds will be migrating en masse back to the UK this month. Expect to see cuckoos, swallows, house martins and willow warblers. Other birds such as great tits will begin nesting while the robin, song thrush and blackbirds will be leaving their nests for the first time.

Bats are back after their winter hibernation and will be looking for places to roost other than their hibernation roost. They tend to prefer hollows, caves or old buildings.

In ponds and rivers the little stickleback fish is breeding and the male is concentrating on making rather cute little nests (google it!)

You may also be lucky enough to spot a common newt on your nature walks this month.

One of the most beautiful sights of April has to be bluebells woods, where carpets of the stunning blue flower spread across woodlands. It’s well worth visiting a few woodland areas to see if you can find this gorgeous scene.

What to do in the Garden in April?

In your April garden it’s time to plant out the potatoes which you’ve hopefully already chit. Charlie and I spent a recent afternoon doing just this and now are impatiently waiting for this first crop of earlies.

If the weather allows start growing annuals, herbs and tomato plants. We’ve been making the most of our polytunnel and are well underway with planting-I’ve also been planting some more unusual herbs which I purchased from Jekkas Herbs last month.